The aim of this post is to investigate the question of whether or not the learning pyramid (see following figure – click to expand) is true or false, or perhaps a hoax, myth, misdirection, useful model and/or theory based on verifiable research.

In the end, I confirm my belief that it is a hoax/myth. I don’t believe it is useful in guiding the design of learning and teaching, in fact, I believe it to be destructive. It aims to provide a simplistic and wrong basis on which to guide design, when such design should be guided by and engage with a recognition that teaching is complex, difficult and contextual and can’t be improved by silver bullets

What do you think? (I do recognise that my direct opposition in the last paragraph is likely to significantly limit alternate perspectives, but I though I’d best be clear of my view given the prevalence of the figure.) 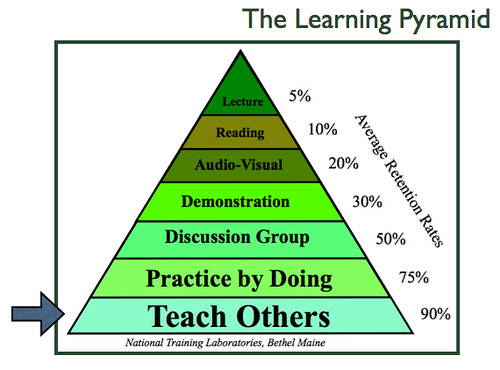 A colleague from my current institution has recently been attending the Jossey-Bass Online Teaching and Learning conference and has been blogging her reflections. In her first post on the conference Wendy mentions a presentation by Rena Palloff and Keith Pratt (who, from their website, seem to be very informed folk around online learning etc.) entitled “Assessing the online learner: resources and strategies for faculty”.

They put up a pyramid I quite liked that had retention rates for lectures at 5% at the top through to teaching others as 90% effective for retaining information (see book, p. 19) and suggested assessments should be aimed at the bottom half of the triangle (discussion activities, practice by doing, teaching others).

This sounds an awful lot like the above pyramid.

Quite some time ago I came across this post by Will Thalheimer. The post essentially seeks to argue that the pyramid is not based on any published research and suffers from a number of major flaws. I was convinced by this post and have since taken the view that the pyramid is false/a myth. I believed this to the extent that when another colleague used the learning pyramid in a blog post, I posted a comment linking back to the naysayer post by Thalheimer.

I was going to post a similar response to Wendy’s post but couldn’t remember some of the resources, so I revisited my comment on Scott’s post. To my surprise, I discovered that Scott had responded to my comment. The surprise arose both from the fact that I don’t remember receiving a notification of the reply (though that may say more about my memory than the technology); and that Scott was claiming that the learning pyramid was based on research that addressed some of the problems. i.e. that there was some basis. In addition, Scott suggests that the questions raised about the pyramid may arise from folk with questionable motives and also suggests that the naysayers don’t provide evidence or experimental research.

I’m going to spend a bit of time seeing what I can find about this difference of perspective. Is the pyramid based on some research? Have I been basing my dismissal of the pyramid on work by people with an axe to grind? Is there evidence to suggest that the pyramid is wrong?

Origins of the pyramid

One obvious place to start is to find out whether the proposed research actually exists. Does the research institute that is supposed to have done this research exist?

No specific credible research was uncovered to support the pyramid, which is loosely associated with the theory proposed by the well-respected researcher, Edgar Dale. Dale is credited with creating the Cone of Experience in 1946.

This is from the abstract of their paper displayed on this ERIC page. My institution’s library doesn’t have access to the full text in electronic form, I’m chasing up a paper copy. (Of course the library website is currently down so I can’t log a request to get a copy of the paper…). Annoyingly, the institution I’m doing my PhD through has digital access to the journal, but not for 2006 through 2008.

Further web research has found a copy of the Lalley and Miller (2007) paper online here. The aim of this article is

Therefore, it is our intention to examine the following: the source of the general structure of the pyramid, Dale’s Cone of Experience; available research on retention from the methods identified by the pyramid; and consider the relationship(s) among the methods.

Rather than Bell Laboratories being the source of research, the research is generally referenced back to the National Training Laboratories in Bethel Maine. From information on the web it appears that this organisation is now known as the NTL Institute. Lalley and Miller (2007) quote from a response from the NTL Institute to a query about the pyramid

Institute at our Bethel, Maine campus in the early sixties when we were still part of the National Education Association’s Adult Education Division. Yes, we believe it to be accurate–but no, we no longer have–nor can we find–the original research that supports the numbers. We get many inquiries every month about this–and many, many people have searched for the original research and have come up empty handed. We know that in 1954 a similar pyramid with slightly different numbers appeared on p. 43 of a book called Audio-Visual Methods in Teaching, published by the Edgar Dale Dryden Press in New York. Yet the Learning Pyramid as such seems to have been modified and always has been attributed to NTL Institute.

Lalley and Miller (2007) go onto give some arguments about why it is appears questionable that this research was ever/could ever be done.

The origins and data for the pyramid look very questionable. So, is there data or research to suggest that the pyramid is wrong?

Lalley and Miller (2007) then go onto review the literature about each of the different methods of instruction included in they pyramid. The aim being to find out what the literature says about retention rates. I have not read all of what they have written (I have a thesis to get back to), but in summary they say (emphasis added)

The research reviewed here demonstrates that use of each of the methods identified by the pyramid resulted in retention, with none being consistently superior to the others and all being effective in certain contexts.

Lalley and Miller’s (2007) final conclusion is that direction instruction, such as a lecture, remains very important as a part of the mix of approaches required. They close the article with

Not surprisingly, this returns us to the assertions of Dale (1946) and Dewey (1916) that for successful learning experiences, students need to experience a variety of instructional methods and that direct instruction needs to be accompanied by methods that further student understanding and recognize why what they are learning is useful.

Rutger van de Sande from a University in the Netherlands has blog post that connects with this myth. He supervised some students (physics teachers) in an experiment to test retention. The rationale and results are explained on this knol. In a small scale study, likely to have all sorts of limitations, they established different percentages to the pyramid, which they conclude “to be an all too simplistic model”.

This, admittedly small, collection of research (though Lalley and Miller draw on a significant body of research) seems to provide evidence and experimental research to disprove the ideas of the pyramid.

Do the folk questioning the pyramid have an axe to grind? That’s a difficult question to answer without significant knowledge of who they are. So, let’s start with the question of who they are.

Don’t think these guys form a cabal aimed at attacking the legitimacy of an ideas based on sound empirical research. You could argue that the attention given by attacking such a widely accepted idea might be motivation, but the data seems to suggest that the pyramid is based on questionable to non-existent data.

Why does this continue to get air play?

A number of the folk who have written about this pyramid or commented on blogs about it have asked the question “Why does it continue to get air play?”. I have a preference for two explanations:

Of course, the idea that I don’t believe there is a silver bullet – i.e. I don’t the application authentic learning will save a course, a program, an institution or the world – means that I have a confirmation bias that leans towards thinking the learning pyramid is a hoax.

40 thoughts on “The learning pyramid: true, false, hoax or myth?”