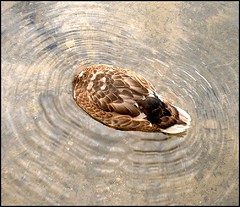 Had to share this quote that I came across via an artefact produced by a student. Actually, the version I’ve found in the original is slightly different, but the intent is the same.

I haven’t read the rest of the article but the quote resonates with me and a couple of recent experiences. In particular the idea that perhaps the first step to help “them to make waves” is that the teachers and the educational organisations that employ them are making waves. And Shneiderman (1998) agrees since just before the above quote comes (emphasis added)

Some technology cheerleaders and national leaders focus on installing computers in classrooms as a measure of success in transforming education. However, even if there were one computer available for each student, with appropriate software and network access, there is no assurance that education would improve. The technology alone can never be a solution, but in the hands of a knowledgeable teacher, appropriately designed technology can become a useful tool. (p. 29)

The trouble is that increasingly I’m thinking that what it means to a “knowledgeable teacher” is extremely limited. Beyond this I also get a feel that the solutions commonly adopted to make teachers more knowledgeable also only address part of the problem. 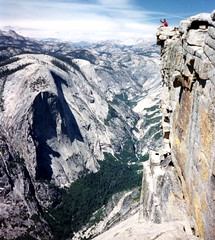 the basic premise of this paper is that a gap exists between the functionality of all institutional information systems and the needs of the staff and students (n.p.)

That particular paper (Jones, 2003) goes on to illustrate various gaps that existed between the systems provided by one university and the requirements of the staff and students. The paper also describes how a group I worked with was able to bridge those gaps/gaping chasms.

The problem is that rather than bridge those chasms, most institutions are reverting to relying on the people to bridge the chasms. Or in the words of Douglas Rushkoff (2010)

…instead of optimizing our machines for humanity – or even the benefit of some particular group – we are optimizing humans for machinery.

Perhaps institutions are defining knowledgeable teachers as those who bridge these chasms.

Are teachers making waves with technology, or are they being overwhelmed by technology?

So when the 2014 Horizon Reports (e.g. Johnson et al, 2014) are identifying the “Low digital fluency of faculty” as one of the “Significant challenges impeding higher education technology adoption”, I’m not so sure.

Why isn’t it happening?

So why aren’t the IT units of universities helping change the technology to bridge the chasms? Groom and Lamb (2014) identify this problem

IT organizations are often defined by what’s necessary rather than what’s possible, and the cumulative weight of an increasingly complex communications infrastructure weighs ever heavier.

“..The level of support, planning and maintenance required for such systems is considerable. So we developed a whole host of processes to make sure it worked well. But along the way we lost the ability to support small scale IT requests that don’t require an enterprise level solution. In short, we know how to spend £500,000 but not how to spend £500.” The myriad costs associated with supporting LMSs crowd out budget and staff time that might be directed toward homegrown, open-source, and user-driven innovation

The world view associated with maintaining large enterprise systems is an anathema to change. The accepted industry best practice recommendation is to implement such systems in their “vanilla” form because local changes are too expensive (Robey, Ross, & Boudreau, 2002)

My belief is that if teachers and organisations want to make waves, rather than surf (the net, the next fad or fashion etc). Then they need to do it by changing technology, by understanding the premise offered by Rushkoff (2010)

Digital technology is programmed. This makes it biased toward those with the capacity to write the code.

Better results come from being able to change digital technology. The ability to bridge the chasms has to be brought back into organisations who wish to be seen as leaders in the “digital age”.

The Connected Courses folk seem very much to get this idea. Overnight the #ccourses tweet stream seemed to include some significant mention of the notion of “tinkering” as a useful approach to knowledge production. Hopefully some universities will get the idea that enabling the ability for teachers and students to tinker with the technologies they used for learning is almost certainly going to be a brilliant way for the organisation to learn to make waves.

Jones, D. (2003). How to live with ERP systems and thrive. In Tertiary Education Management Conference’2003. Adelaide.

Rushkoff, D. (2010). Program or be programmed: Ten commands for a digital age. New York: OR Books.

4 thoughts on “Learning how to make waves”