Metaphors are useful. They reveal some of the underlying assumptions held by people. For example, this paper (Behrens, 2007) reveals that Information Systems research has a strong bias towards thinking of organisations as if they were machines. A bias that tends to invade most organisational practice. The following picks up on a couple of recent events to examine one of the metaphors commonly used in academia. It argues that this metaphor reveals some problematic assumptions.

The standard trope around academics and change is herding cats. Captured memorably by an EDS commercial

Of course, anyone who knows cats, knows that’s not the way to get cats to do anything.

Update: (26/06/2015) Apparently the Mythbusters have some empirical proof of how difficult this might be. As pointed to by this tweet

Can you actually herd cats? http://t.co/Jz5jZY3AwW <– some people I know will relate to this :-) @anitranot

Obviously this difficulty was foresee by others, as (end update) is illustrated by a tweet yesterday from @SAlexander_UTS summarising a point made by a senior academic

That you know where to move the food to

The first assumption is that someone (typically senior management) know where to move the food. i.e. someone knows what is the best strategy, the best practice. This is the assumption that underpinned Mao’s four pests campaign to eliminate rats, flies, mosquitoes and sparrows. The sparrows ate grain meant for the people, so had to go. They were eliminated by (amongst other measures) millions of villagers heading out to bang pots and pans to continually scare sparrows so they would never land and hence die from exhaustion. The campaign was so successful that there was a locust plague.

Apparently, the sparrows also ate insects, including locusts. With most of the sparrows dead, the locusts bred leading to somewhat troubling and unintended consequences.

Change of a complex adaptive system – like a university/organisation – is very very difficult because it’s difficult for a group of people (even if they are super intelligent senior management) to understand all of the consequences of changing where the food is located.

That you can successfully move the food 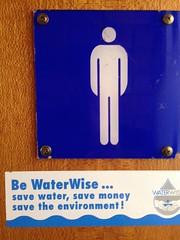 The other assumption underpinning the herding cats metaphor is that you can successfully move the cat food (or herd the cats). i.e. once you’ve identified where to move the cat food to, that you are capable of picking up the cat food and moving it to the new location. At an organisational level this is very hard for any meaningful change.

For example, over the last two days I was attending a planning session for the two schools of education at my current institution (I work in one of those schools). The sessions were held in the dining room of one of the colleges on-campus. The restroom for men at this college provides a wonderful metaphor for just how difficult it is to move the cat food and illustrates what “moving the cat food” typically looks like in most universities.

As the image shows, the door into the restroom had prominently displayed a sticker promoting the idea of being water wise. Someone in the college or broader institution had identified being water wise as a good idea and was trying to herd the cats in that direction.

The only trouble is that when you entered the restroom you soon became aware of running water. As the next image shows it appears that the washer in the basin tap was shot so that tap was continually leaking. No matter how water wise I wanted to be….

When it comes to “moving the cat food” in universities. It often more closely resembles the distribution of lots of stickers, rather than effectively modifying the environment to achieve the stated goal. So an institution that is keen on Open Educational Resources runs lots of special events and creates websites espousing the benefits of open educational resources. But at the same time retains a default position that the copyright for all teaching materials created by staff remains with the university. If I want to convert my teaching resources into open educational resources, I have to ask the legal office for permission.

So, assuming that you can

The assumption is that the cats will follow the food. That they will happily accept your arbitrary decision that they should eat in a new location.

Anyone who knows cats, knows that this isn’t going to work. For example.

If there is a defining characteristic of cats it is that they have a fairly high level of agency. They will decide whether or not the new destination suits. If it doesn’t, they will do something else.

For example, if you design a new standard look and feel for the institutional LMS and it is a step backwards in terms of functionality, then some academics will work around that look and feel.

I’m a cat person (I’m also a dog person) and based on my experience there are other alternatives.

Scruff of the neck 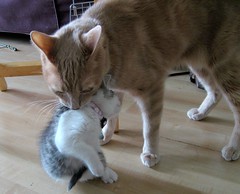 You could take a leaf out of the species textbook and grab them by the scruff of the neck and take them where you want. This is an approach that is being taken by some management. However, it still suffers from exactly the same problems as outlined above.

Beyond those problems, it adds the additional problem of changing the relationship between you and any adult cat you try this with. Especially if you try it repeatedly. 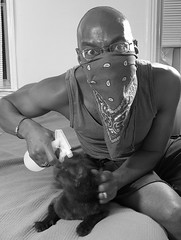 Of course, this actually can only ever prevent the cat from doing the wrong thing, rather than take them to a new place. It also assumes you can identify the “wrong thing” to do.

But worse than that, there is an argument that it doesn’t even work and I quote 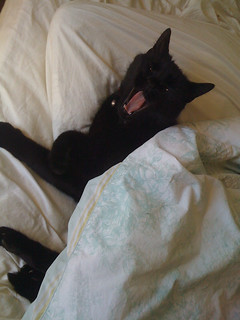 This is Tommy (aka Son). He’s my cat/I’m his human. We’ve been together for must be almost 9 years now. Tommy can be the other side of the yard, but if I make a particular noise (and all things being equal) he will generally head my way (at his own speed). He knows that there will be a positive outcome and generally desires that outcome. He trusts me. If something in the environment changes (e.g. visitors) he may not, but in the right circumstances I might be able to get him to surface, but there are limits.

This is another approach you can take with cats. However, it still suffers from the same problems as above. It assumes that I (senior management) know where to go and can successfully get everyone there.

Surprise – let the cat(s) take you where it will

An approach that doesn’t seem to be all that much discussed is to let the cats be cats. Enjoy what they do and what they will give you. Perhaps establish a few routines and the appropriate environment, but the reason anyone owns a cat is because cats surprise and give enjoyment. Letting cats be cats.

Just a bit like organising a children’s birthday party.

One thought on “Metaphors and organisational change”