The following outlines an attempt to evolve the authoring “process” I currently use with Moodle books into something a little more useful. It won’t be the be all and end all of authoring process, just enough to solve the immediate problem I have. i.e. bricolage

I’ve essentially got this working on my end. The problem is that the Moodle book module has a few flaws in how its import function works which means I can’t really use this approach. At least until the book module is fixed. I’ve fixed most of it on my own install of Moodle. Will have to find out how that might happen.

As it happens @abelardopardo wrote a post yesterday titled Re-visiting authoring: Reauthoring that touches on the broader problem and offers a solution. Many of the conditions he outlines align with mine, however, my need is more immediate and contextual than what would be need to explore and adopt his solution.

And I remember @timklapdor doing some work around this broader issue last year. Yep, I even commented on his post. A comment that captures some of my disquiet about institutional approaches to solving the authoring problem (I know my institution will be having another go at this soon).

Meaning I’m not trying to solve it at the institutional level. I’m simply aiming to enhance my current practice a bit. An “inside out” approach, rather than outside in.

If I had the time I might have modified the approach below so that rather than exporting the Moodle book into HTML files on my computer, I’d have it exporting to pages on my smallest federated wiki (SFW) (and back into the Moodle book). With this approach the SFW version would be the definitive version. It has version control built in at the paragraph level and opens up a range of possibilities of students (and others) being able to fork and work on their own versions of the content. An affordance that could potentially be much more interesting from a learning perspective and in terms of being “open”.

However, the SFW authoring environment doesn’t feel quite as natural to what I plan to use below. That may simply be familiarity, but there’s also the problem that SFW somewhat denigrates the use of HTML and is somewhat limited in terms of presentation and embedding. Why not use SFW, rather than Moodle books? Mainly because the course design currently (and perhaps problematically) relies on Moodle activity completion. Not a function that is available in SFW, nor a function that is sensible in the SFW world-view. It also appears – after a quick test – that SFW doesn’t necessarily play all that nicely with search engines. Meaning that SFW doesn’t solve my big bug bear with Moodle, no search capability.

Deja vu all over again: why?

I do this with some reservation due to a sense of deja vu. Almost 20 years ago as I prepared my first totally web-based course I wrote a set of scripts to help with authoring the web-based study material (thank you the web archive). Tools and an outcome not unlike the approach I’m working toward below and not that far removed (but far more primitive) than those mentioned above.

Why? Why after 20 years this authoring problem still hasn’t been solved? Why do there remain a plethora of disjointed systems and no-one really good solution?

Perhaps mainly because there is a plethora of disjointed systems in which the resources that are authored have to fit. Each of those disjointed systems have different world-views and subsequently sets of functionality. Hence it’s almost impossible for one authoring process to fit nicely into all of them. e.g. the talk above about integrating SFW and Moodle books. Adding more complexity, and touching on the comment I made on @timklapdor’s post, the people who are likely to use, the people that will use these authoring systems come with their own set of world-views, preferences and peccadilloes. The gaps between all these world-views are perhaps just big enough to prevent the wide acceptance of a single approach.

Suggesting that designing or selecting a single system (an outside-in approach) for everyone to use is destined to fail. There will always be gaps between the different world-views. Even if you can get everyone to agree, in a year or so another type of system will arise and there will be another gap to overcome. Perhaps a better approach is focus on what people are currently doing and bridge the gaps (an inside-out approach), which is sort of what I’m doing here.

The problem and context

As outlined in a previous post and shown in the following screenshot my course uses “Moodle books”. Each Moodle book tends to be focused on a specific task and generally is wrapped around external resources. 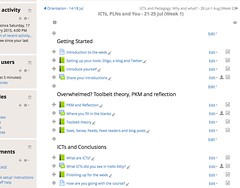 These books were originally written in HTML using the vi editor and manually imported into Moodle. Last year I made ad hoc changes by using the book module’s “editing” interface. That’s not a great process.

The wish list for what I want from a process

In essence, I’d like to edit the books using vi (or whatever HTML editor etc I end up using) on my local computer. When I’m happy with the book, commit it to source control and import it into Moodle.

In a perfect world, at the start of a new term I’d have a process that dumps the migrated books from the new course site onto my local computer ready for editing and importing into source control.

The following documents some exploration of various possibilities that might help achieve the above.

Import and export from a Moodle book

When I started all this either I was aware of, or the Moodle books didn’t have an import facility. Time to play with that as it may be the foundation for putting content back into Moodle quickly.

It appears it accepts each chapter as a HTML file. Which is a bit of a bugger as I’d hoped to work with a single HTML file locally and upload that. Appears I may need some sort of script to produce the format required by the Moodle book. Let’s test this out

This will have to wait until another day.

A structure that works

Wait for another day. But I assume the aim would be to have EDIT.html in git with the surrounding structure.

2 thoughts on “Kludging an authoring process with Moodle books (almost)”