Back in February I shared shared some thoughts about some ideas for grants for producing an “open textbook” at my current institution. In the end, these thoughts were translated into an application which has just been officially announced as being successful. The following is my first attempt to get my head back into the project and outline

Rather use the funds to write an (is it at the stage of “yet another”) open textbook. The project aims to develop a framework to enable the re-purposing of existing course materials as Open Educational Resources (OERs). In this context, “framework” is defined as “a collection of technologies, processes, and practices”. The idea is to create and test a framework that others may be able to use to create their own OERs as part of producing their course websites. 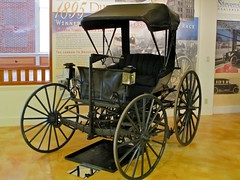 While this project has an initial focus on producing an “open textbook”. I’m hoping the project will move beyond the limitations of the “book” metaphor. For me, an open textbook makes about as much sense as a horseless carriage. In fact, one of the aims of the project is to provide support in the framework for moving beyond an open textbook. For example, enabling the sharing of small bits of the “book”, for that “sharing” to include more than just re-using the finished product, and move more into co-authoring etc.

The framework is required because

The project – like most of what I do – will be use an approach informed by a BAD mindset. That is:

The project will likely produce at least the following products:

The project comes with four main aims with some associated timelines:

The timelines are specific to the grant. In reality, much of this is intended to continue post the grant. If only because I will be using the framework in my own teaching. Some details of what might be done to achieve each of the aims follow.

Explore the affordances and limitations

The aim here is explore what people using the Moodle book module are missing and what they enjoy from the module. Also involves becoming more aware of the affordances that are available for producing an OER/open book in terms of broader technologies and practices.

Throughout the second half of 2015 the plan is to use the modified version of the book module in the courses that I’m responsible for. EDC3100 is a course I’ve been teaching for 4 years and has a range of existing resources. EDS4406 is a new course that is about to be developed and taught in the second half of 2015 for the first time. EDS4406 will be using much the same design as EDC3100 and is being developed by a course writer with some oversight.

Exactly how and what can be tested will depend on local negotiations. The main barrier will be if and how the latest version of the modified Moodle book module can be harnessed in a course that is being offered. There are good reasons why this will probably involve some workarounds to ensure minimum disruption.

By the end of 2015 the plan is to have at least the EDC3100 material (and hopefully EDS4406) available in ePub/mobi/PDF formats.

Beyond seeking to make it easier to develop OERs via the Moodle book the project is also an opportunity to do a bit of small scale research into broader questions about the implementation of e-learning in universities and OERs. Some of the questions I want to explore

What’s the right balance between course specific and generic?

The EDC3100 books are specific to the course and its context. It references Moodle, assignments, Professional Experience and other concepts/practices etc that are specific to the institution. These limit the usability and usefulness of the OERs for people not withing that context.

What’s the right balance between course specific and generic? Can you ever be generic? What implications would have course materials openly available have for pedagogy, for students, for the institution?

Who is making changes to the LMS and why?

The Moodle book has been around for quite some time. I’m wondering how much its functionality has evolved over that time. Why? Who made the changes to the Moodle book module? What might be learned from answers to those questions about the evolution and practice of e-learning within Universities?

How can you break BAD with the LMS? What’s the impact and value of doing so?

We argued in in this paper that “teenage sex” problem with institutional e-learning is caused by the overwhelming use of the SET mindset to drive its implementation. This project is explicitly trying to use a BAD mindset to help. Can it be done? Or is as we identified in the paper, the overwhelming assumption of a SET mindset too strong to overcome? If it can be, does the BAD mindset help or hinder? What works, what doesn’t? Why?

Can the “remix hypothesis” and the 4Rs be applied to the systems, not just OERs?

The technologies currently being used by institutions to implement e-learning – even open source systems like Moodle – are implemented in ways that limit use against the 4Rs. e.g. my experience is that if you revise the HTML generated by the LMS using JQuery or Greasemonkey you run the risk of being accused of being “dodgy” or “breaking policy”. Instead of being open and protean, the digital technologies universities are using are closed (even if they are open source) and concrete in terms of what teachers and students are allowed to do with them.

I want break the concrete and explore the benefits of being protean.