This is the second in a series of posts exploring the usage of the Moodle Book module at my current institution. The first post gave some background and outlined an initial series of questions about Book usage that I’m aiming to explore. This post reports on initial findings related to the following

The hope is that the next post will explore the following

Note: Click on any of the following images to see larger versions.

The following graph shows the number of different course offerings (my course – EDC3100 – is offered twice a year, so it’s counted twice) using the Book module each year.

It shows the growth in use of the Book that initially sparked my interest in this analysis. One of the reasons I was interested in this is due to the authoring process around the Book module being quite difficult to do a reasonable job. I put in place a range of additional support to make it meaningful, and I’ve observed other people give up on using the Book because it’s too hard. Raising the questions, 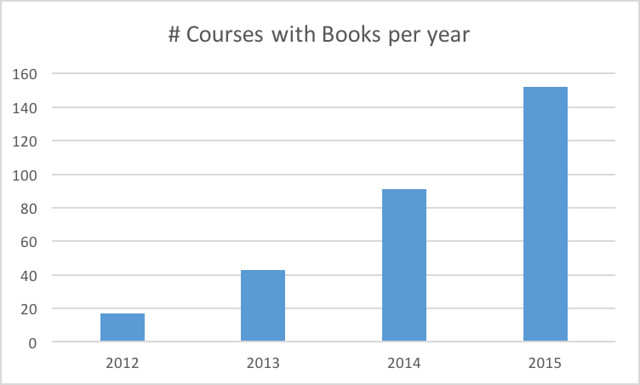 Number of Book resources per course

The Moodle Book module is used to produce individual resources (aka books or book resources). How many books did each course produce with the Book module? The following graph gives an answer.

Note: The next two graphs include data from 2016, but this only includes data up until February 2016. Hence the data really only shows results for a few early course offerings getting set up for first semester.

Number of revisions per Book

Resources produced by the Moodle Book module can be edited and updated. The Moodle database keeps a simple counter revision that indicates the number of times such a resource has been updated.

My guess is that the growth in usage of the Book module at my institution has been driven by people moving the course study guides into the Book module. Previously these were available as stand-alone PDF documents, but the technology used to produce these was phased out. Since these PDF documents were generally not updated during semester, I was predicting that there would be a relatively low frequency of revisions to Book resources.

The graph below shows that the median number of revisions per book resource is no more than 2 (i.e. 50% of the books aren’t edited more than twice). The maximum (minus outliers) peaks at 45 and 32 in 2015 respectively.

It also shows a large number of books with 0 revisions. A quick check of the data reveals that the percentage of books that were never revised each year was: