As it happens, we’ve been talking and thinking about the Visitor/Resident typology (White & Cornu, 2011) that last couple of weeks. The network gods have been kind, because over night a post titled “The resident web and its impact on the academy” (Lanclos & White, 2015) floats across my Twitter stream. Much food for thought.

It has me wondering

Are universities are digital visitors? If so, what impact is this having on learning and teaching?

Update: more reading and thinking has led to the addition of a section “Branding pushing out social traces”.

White & Cornu (2011) describe visitors as those that

understand the Web as akin to an untidy garden tool shed. They have defined a goal or task and go into the shed to select an appropriate tool which they use to attain their goal…Visitors are unlikely to have any form of persistent profile online which projects their identity into the digital space

White & Cornu (2011) describe residents as those that

see the Web as a place, perhaps like a park or a building in which there are clusters of friends and colleagues whom they can approach and with whom they can share information about their life and work. A proportion of their lives is actually lived out online where the distinction between online and off–line is increasingly blurred. Residents are happy to go online simply to spend time with others and they are likely to consider that they ‘belong’ to a community which is located in the virtual…To Residents, the Web is a place to express opinions, a place in which relationships can be formed and extended.

@damoclarky and I argued that institutional digital learning is informed by the SET mindset. A mindset that approaches any large, complex problem (like digital learning) with a Tree-like approach. That is, it employs logical decomposition to break the large problem up into its smaller and smaller problems until there is a collection of solvable problems that can allocated to individual units. The units now solve the problems (largely) independently, and each of the small solutions are joined back up together and consequently (hopefully) solve the original big problem.

You can see evidence of this tree-like perspective all over our institutions and the digital learning spaces they produce.

The institutions themselves are divided into hierarchical organisational structures.

What the institution teaches is divided up into a hierarchical structure consisting of programs (degrees), majors, courses, semesters, weeks, lectures, and tutorials.

And more relevant to this argument, the institutional, digital learning space is divided up into separate tools.

At my institution those separate tools include, but are not limited to:

Each tool is designed to serve a particular goal, to help complete a specific task.

Hence the tendency for people to see these digital learning spaces “as akin to an untidy garden tool shed” where when they want to do something they “go into the shed to select an appropriate tool which they use to attain their goal” (White & Cornu, 2011).

This collection of separate tools is not likely to be seen as a “place, perhaps like a park or a building in which there are clusters of friends and colleagues whom they can approach and with whom they can” (White & Cornu, 2011) learn.

Of course, there is some awareness of this problem, which leads to a solution. 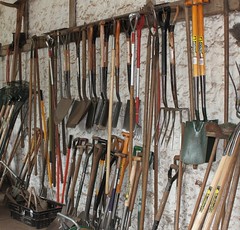 Increasingly, the one solution that the corporate university seems able to provide for this “untidy garden tool shed” problem is branding. The idea being that if all the tools use the same, approved, corporate brand then all will be ok. It will be seen as an institutional learning space. With the emphasis explicitly on the institution. It is the institution’s brand that is used to cover the learning space, not the learners and not the teachers. With which I see some problems.

First, is the observation made by Lanclos and White (2015) in the context of the resident web and the academy

scholars will gain a form of currency by becoming perceived as “human” (the extent to which ‘humanness’ must be honest self-expression or could be fabricated is an interesting question here) rather than cloaked by the deliberately de-humanised unemotive academic voice.

In this context the problem isn’t so much the “de-humanised unemotive academic voice” as it is the stultifying, stripping of individuality on the altar of the institutional identity. It doesn’t matter whether you’re learning engineering, accounting, teaching or anything else. It’s the institution and how it wishes to project itself that matters.

Which creates the second problem for which one of my institution’s documents around a large institutional digital learning project provides a wonderful exemplar.

Anyone else see the contradictions in the adjectives? – “consistent, high quality, brand enhancing and optimal on-line student experiences”

Can you have a digital learning experience that is consistent, brand enhancing, and optimal for each student? I tend to think not. Especially in light of arguments that the diversification and massification of the student body has led universities to shift their education rhetoric from a notion of “one size fits all” to a concept of tailored, flexible learning (Lewis, Marginson et al. 2005).

It would seem obvious that such a branded space couldn’t be seen as “my space”, especially for students. But what about the impact of teachers. Many teachers – for better or worse – like to customise the learning space (not only for the needs of the students) but also to meet project their personality. Can this be done in a branded digital space?

The above points to an institutionally provided (and sometimes mandated) digital learning space that is more likely to resemble and consistently branded, untidy garden tool shed. A perception that is unlikely to be perceived by learners and teachers as a space they would wish to inhabit. Instead, it’s more likely to encourage them to see the learning space as place to visit, complete a task, and leave ASAP. Which would appear likely to negatively impact engagement and learning.

The academy can no longer simply serve its own communities in the context of the networked Web, and it is under increasing cultural pressure to reach out and appear relevant.